One of the themes that was used for one of the recent swaps at A Lil Scrap Of Heaven was a wishing well swap. We were to make a wishing well using a template created my Cynthialoowho, decorate it, and fill it up with goodies. My partner for this swap was Joanne, and here are some pictures of the wishing well she made for me. 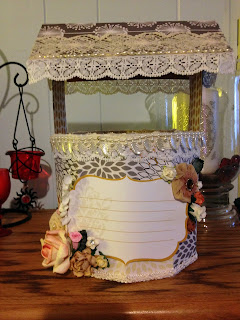 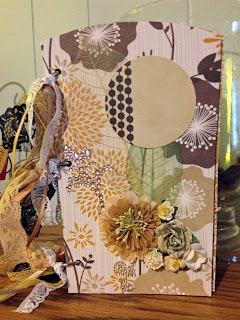 Joanne and I were also in a challenge together. For the challenge, we had to make layered flowers from single flowers. I thought it would be fun if we sent each other some of the flowers that we created from this challenge. Here are the beautiful flowers that she made for me. 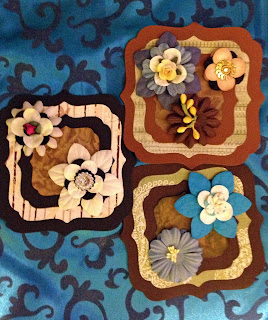 Here are some beautiful sprigs that she sent to me also. I am sure going to put these to good use. 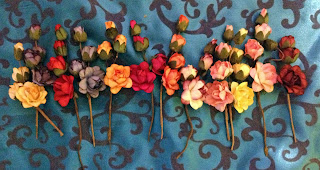 Now for a little rant...lol! I have to admit, I was getting a bit nervous about this swap. Joanne had told me, probably about 2 months ago, that she had sent this swap out, and all that time I was on the look out for it, and it wasn't showing up. I had asked at my post office about how long it should take for a package from the UK to get to California, and they said a couple of weeks. I told them when the package was sent off, and they said I should have received it before then . Joanne checked on her end, and wasn't able to find out anything either. Finally, last week, I got a notice in the mail from the post office that they tried to deliver a package, and that it was the final notice before it was sent back. When I went to the post office to pick the package up, I found out that it had been sitting there for about a month. Needless to say, I was pretty upset, but revealed to find out it was ok.

Unfortunately this has been happening quite often, not getting delivery notices till it's the final attempt. I was informed that the mail carrier was new, and maybe didn't know exactly how he was suppose to do things, and that hopefully he gets the hang of things soon. Hopefully he does, because postage costs are high enough, we should be getting better service than that. What do you think?

Jill
I'm a single grandmother raising her two grandsons at the present time. I work as a teacher aide for severaly handicapped children. My favorite subjects to scrapbook, are of course, my grandsons. I love to take lots of pictures of them with my digital camera. I like to read mostly Fantasy novels. My favorite book series used to be Dragon Lance, until I met Harry Potter. I have read most of them at least 2 times , and have watched the movies several times each. I'm also wrapped up in the Twilight series as well.