Hi everyone, thanks for coming by. It's time for another post from me,  for the Card A Day Blog. This week's theme is, Easter. 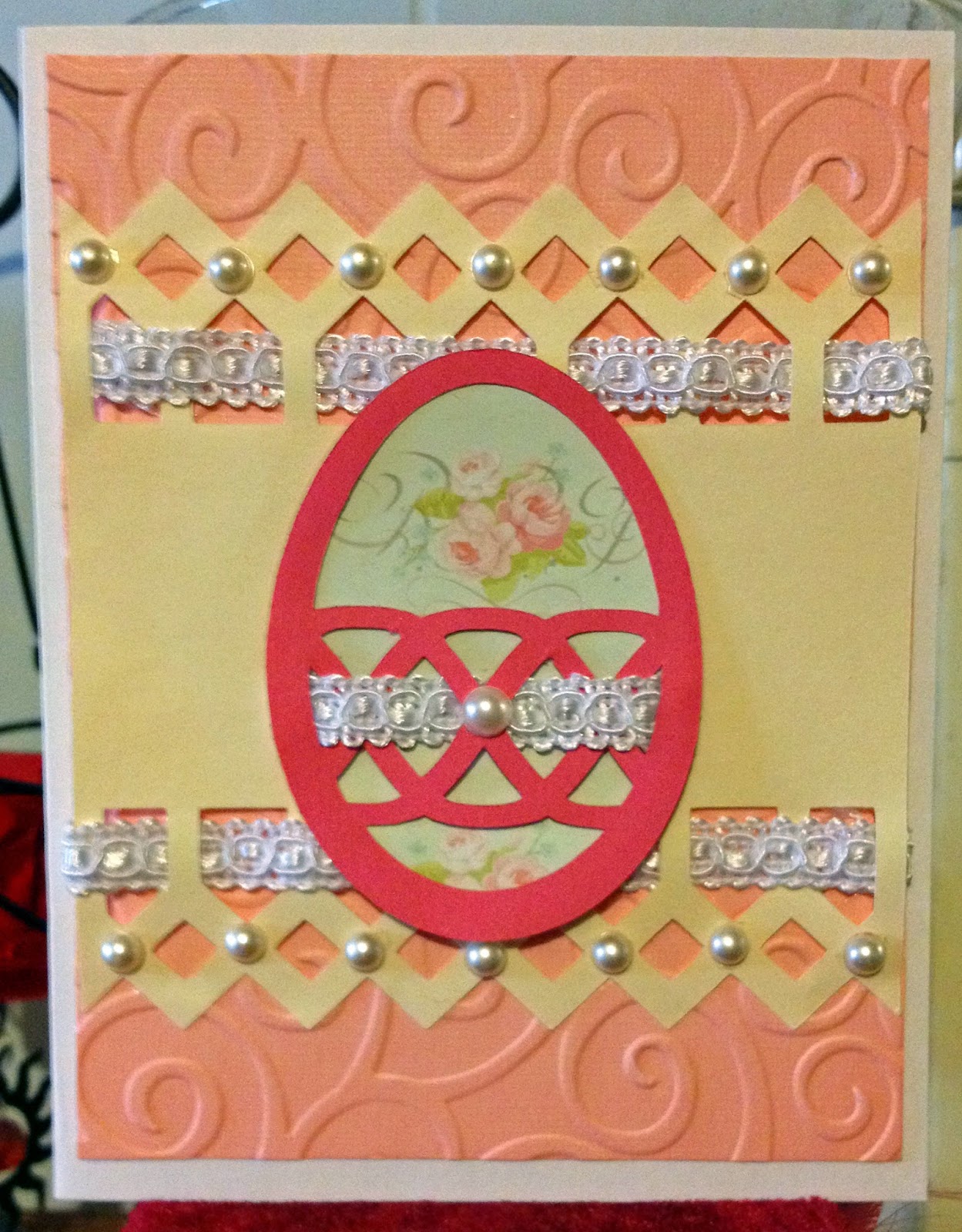 To make my card, I first started off with a 5.5"x 4.25" white card base. For my background , I cut a piece of pink card stock, cut to 5.25" x 4", and embossed it with the swirl Cuttlebug folder, and my Cuddlebug, then adhered that piece to the front of my card base.

For my Easter egg, and the band behind it, I chose to use my new Silhouette Cameo that I just recently purchased. I decided to use a couple of the files I had purchased through their store, one of the Easter eggs from the Assorted Decorative Easter eggs set, and the Single Trellis background.

For the Easter egg, I chose my design, sized it to the size I wanted, and cut it out of a darker pink card stock, I then wove some trim that I had in my stash into the openings on the egg, then added a flat back pearl to the middle. To line the inside of the egg, I placed it on the design paper that I chose, so that one of the flowers showed on the top opening on the inside of the egg, traced around my cut egg, then cut around where I traced, I then glued both pieces together.

I hope you like my latest creation, and if you have the time, please leave me a comment and let me know what you think. Be sure to stop by the Card A Day Blog, every day, and see what our designers have made to inspire you with. If you like to enter challenges, you'll want to check out our monthly challenge, for a chance to win a great prize!

Hello again, it's time again for another Card A Day Blog post. This week's theme is, " Baby". Here is the card I created following the theme. 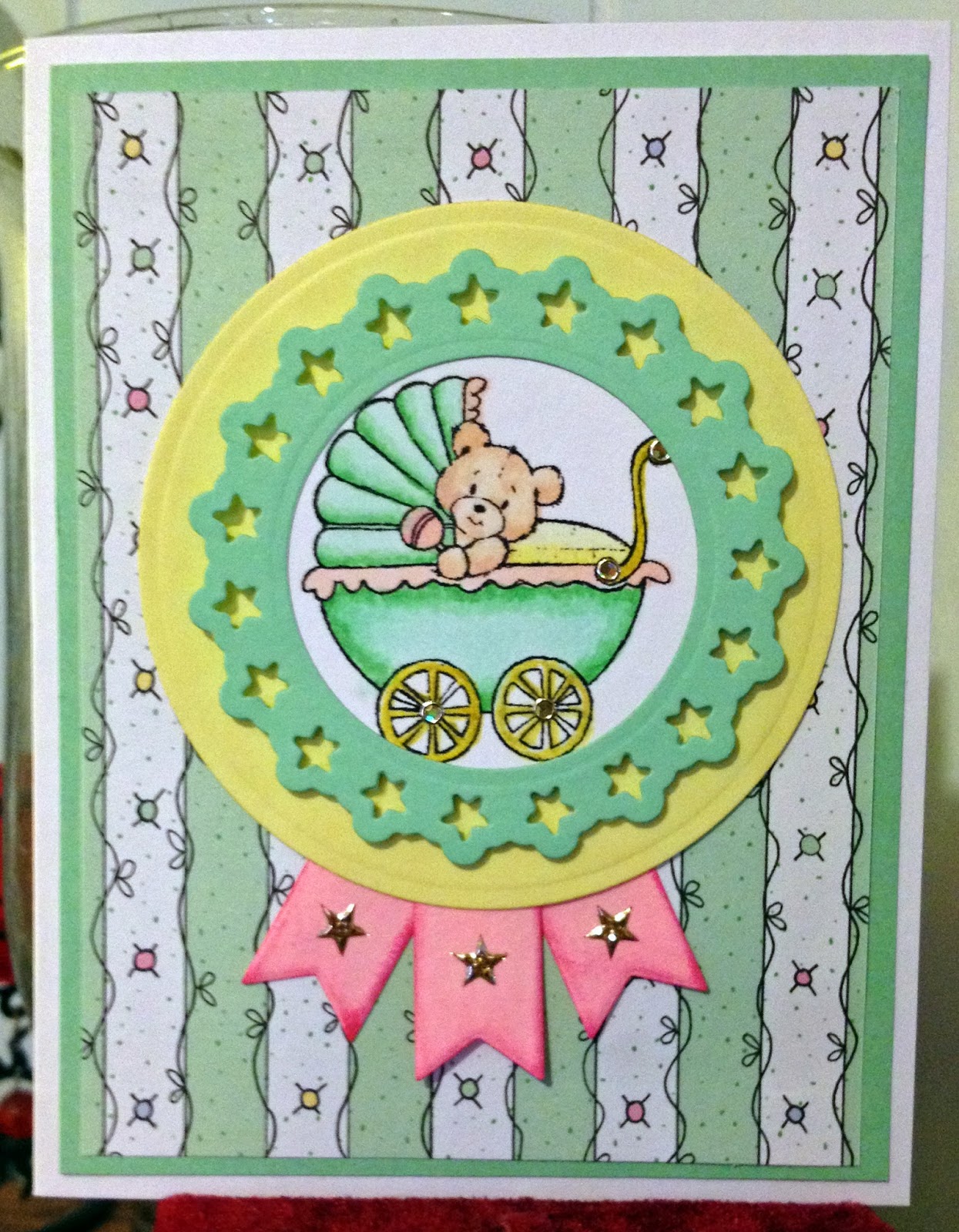 For my center piece, I chose an image which was a digi stamp that I had that was created by Anne Bodil. I decided ahead of time which dies I wanted to use, and printed my image so that it would fit inside the die that I wanted to use, which was the next to the largest die from the Spellbinders Star Circle set, that I cut out using the same green card stock I matted my patterned paper with.

After I printed my image on white card stock, I chose the colors I wanted to color it by using some of the colors I saw on the designer background paper. I chose to use, Copic Marker numbers, R11, RV21, G000, G14, YG41, Y000, Y02, Y08, E11, E21, and E50. I then cut out my image using one of the Spellbinder circle dies that best fit the image, but I found that it was a little too large for the star die, so I decided to cut a circle inside the cut star die using the next smallest circle that I used for the image. When I placed the image behind the star die, I found that some of the white card stock could be seen part way through the stars, so I had to trim around it just a bit, so it wouldn't show when placed behind it. I then cut out another Circle, using a die that was larger then the star die, using light yellow card stock, then adhered my image with the star die on top, using dimensional tape.

For my little banners at the bottom, I used the middle banner die from the Stamps Of Life, Sampler Dies set, cut from pink card stock, inked the edges with pink ink and a makeup applicator, then adhered them to the back of the bottom of the matted image, so that just enough of the top was tucked behind the piece so they would stick. I then adhered this whole piece to the center of my card. For a little sparkle accent, I added some of the littlest gold circle Jewel Dazzles to the wheels and handle of the buggy, and gold star Jewel Dazzles to the banners.

I hope you like this little card I made. I would really love to hear what you think. Be sure to stop by the Card A Day Blog every day for some wonderful card making ideas, and if you're into challenges, you might want to check out our monthly challenge, for a chance to win a great prize!

Jill
I'm a single grandmother raising her two grandsons at the present time. I work as a teacher aide for severaly handicapped children. My favorite subjects to scrapbook, are of course, my grandsons. I love to take lots of pictures of them with my digital camera. I like to read mostly Fantasy novels. My favorite book series used to be Dragon Lance, until I met Harry Potter. I have read most of them at least 2 times , and have watched the movies several times each. I'm also wrapped up in the Twilight series as well.